How to get to the Stade de Lyon

After opening earlier this year, the Parc Olympique Lyonnais has quickly become one of France’s finest sporting venues.

It’s hosting a range of matches for Euro 2016, with Northern Ireland representing British interests in the group stage as they face off against Ukraine.

You can drive down to Lyon with relative ease. Though the journey is pretty long it’s all on big main roads, and because the stadium is on the outskirts of Lyon it’s easy to reach.

If you’re thinking of driving down to Lyon to watch some matches we’ve put together a little guide to give you the best routes to the Stade de Lyon.

Lyon has had a sports stadium since 1926, when the original Stade de Gerland was built. This was home to Lyon’s legendary football club Olympique Lyonnais from 1950.

The team dominated the French Ligue 1 throughout the early 2000s and moved to the new stadium, officially known as the Parc Olympique Lyonnais, in 2015.

The new stadium is often called the Grand Stade de Lyon, or just Stade de Lyon, and it will be holding group stage matches as well as the last 16 playoffs and a semi-final.

In 2008 the French government agreed to the building of the new Stade de Lyon but various issues delayed construction and the stadium didn’t open until January 2016.

With a capacity close to 60,000, the stadium is one of France’s finest and offers a superb match experience.

On arrival at Calais you can then undertake the journey down to Lyon. The drive from Calais to Lyon will take in the region of about six and a half hours, which you could do in one shot, but given the travel time you’ll have already undergone from the UK to Calais you may wish to break the journey up.

Good places to stop for an overnight stay include:

These will split the journey nicely, and all offer plenty of choice when it comes to accommodation and dining. If you have time to spare then you can do some sightseeing too.

Whether you decide to have a stopover or not, this is the route to take from Calais to Lyon:

Once in Lyon follow directions either to your hotel or to the Stade de Lyon, which will be marked Parc Olympique Lyonnais.

If you don’t fancy the journey by ferry or Channel Tunnel then you could fly into Paris and hire a car for the onward journey. That way, you get to bypass the cross Channel journey and enjoy a straightforward motorway drive down to Lyon.

The route from Paris to Lyon will take about four and a half hours and is as follows:

Like most routes on major motorways in France there will be tolls to pay, so make sure you have sufficient cash or be prepared to pay by card.

The map below shows Lyon and the stadium’s location within it: 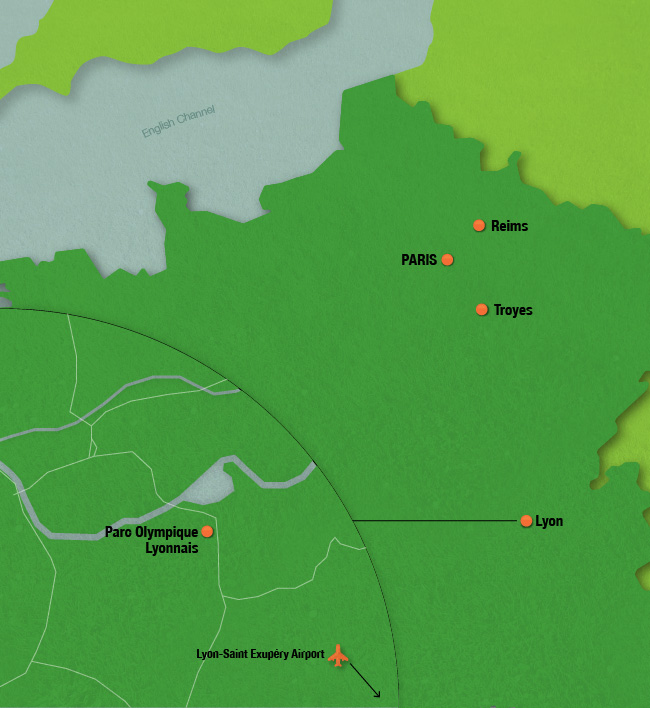 It may be a long drive down to Lyon, but it gives you the opportunity to see a large swathe of France.

Plus, if you take a couple of stops at various points along the way, you’ll be rested before the big game and able to fully enjoy the atmosphere of Euro 2016.

Read more
How to get to Stade Geoffroy-Guichard

Read more
How to get to Stade Bollaert-Delelis