How to get to Stade Bollaert-Delelis

If you want to follow the ups and downs of your national team during Euro 2016, then driving over to France to watch some of the matches will let you enjoy more of the atmosphere than watching from your living room or the local pub.

On 16 June, the Stade Bollaert-Delelis in Lens is hosting several matches, including a UK derby between England and Wales. If you want to be there in person, follow our driving guide to make sure you get there with ease.

The stadium was initially built in 1934, and started out as a small oval stadium, with a capacity of 12,000 and a single grandstand with the rest of the seating made up of terraces. At the time it was named the Stade Félix-Bollaert.

During the ‘70s the stadium was enlarged with additional grandstands and was then given new stands before the 1984 European Championships to bring its total capacity up to 51,000.

In 2012 it received the new name Stade Bollaert-Delelis to honour the passing of the former mayor of Lens, André Delelis who had held the position for 32 years until 1998.

The stadium is situated just a kilometre from Lens’ central railway station, right in the middle of the city. This does mean that accommodation and restaurants are nearby, but as Lens is a relatively small city they will quickly become booked and crowded during the Euro 2016 matches and many will choose to stay in Lille or even Paris.

Driving to the Lens Stadium

It’s perfectly possible to drive from the UK straight to Lens, and the journey is so easy that driving from the UK will make the most sense for many. If you’re not familiar with the rules of the road in France you can find out more by reading our guide to driving in France.

The map below shows Lens and its location in France. Its proximity to Calais, Lille and Paris makes it easy to reach by car no matter where your starting point. 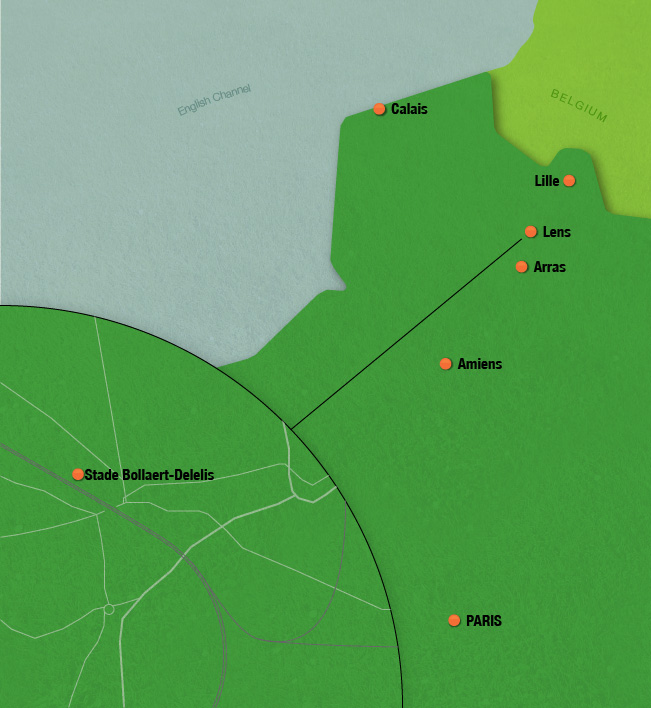 If you’re driving from London to Lens then your destination will be either Dover, for the cross-channel ferry, or Folkestone, for the Eurotunnel. Either way, you need to get onto the M20 and follow signs to Dover/Channel Tunnel/Maidstone.

If you’re heading to Dover you’ll need to:

On arrival at Calais you have a drive of about an hour or so into Lens. The drive from Calais to Lens is well signposted and on good roads, so shouldn’t present any problems.

This is the route that will take you into Lens, and from there you can follow directions to your hotel, or onto the stadium if you aren’t staying over in the city.

If you decide to stay in Paris, or fly into Paris and then hire a car to drive onto Lens, you’ll find getting from Paris to Lens pretty easy. Several roads on this route are toll roads, so make sure you have cash or card on hand to pay the fares.

Before the more detailed instructions, make your way onto the A3 leaving Paris, then:

Lens is one of the easiest venues to reach for Euro 2016 if you’re travelling by car, so there’s no excuse to miss out on the excitement of the tournament.

Read more
How to get to Stade Geoffroy-Guichard

Read more
How to get to Stade de Lyon