How to get to Bordeaux

Bordeaux in south-western France is a UNESCO World Heritage Site and an increasingly popular tourist city, famous for its architecture, parks and gardens and vibrant culture.

Luckily for football fans, Bordeaux has been chosen as one of the cities to host football matches at Euro 2016, including Wales vs Slovakia on 11th June.

Construction began on the Nouveau Stade de Bordeaux in 2013 and finished in May 2015, just in time for the penultimate day of the Ligue 1 season. This sparkling new stadium, which is also known as ‘Matmut Atlantique’ after a naming rights deal, accommodates up to 43,000 spectators. This makes it the sixth largest football venue in the country.

The home side, Bordeaux FC (more formally known as ‘Football Club des Girondins de Bordeaux’) previously played at the downtown Stade Chaban-Delmas, before moving to their new home on the city’s northern outskirts.

The new Bordeaux stadium is easily accessible by public transport from the city centre thanks to its efficient tram system, so finding a hotel in bustling central Bordeaux would be a good option. The Tram C service stops at Nouveau Stade de Bordeaux and is just a short walk from there.

Take a look at our Bordeaux map to help you plan your trip. 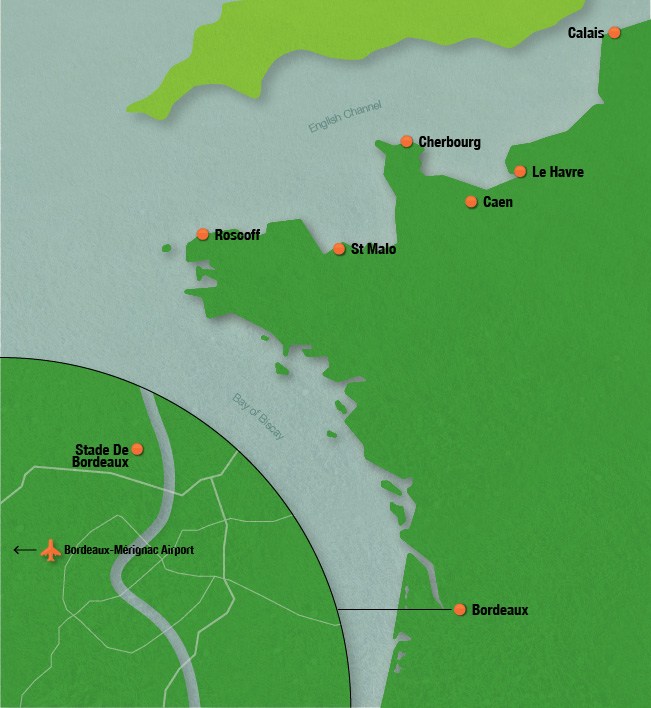 On 11th June at 5pm, Wales will take on Slovakia at the Nouveau Stade de Bordeaux in their opening match of the Euro 2016 finals. Both nations will be looking to build on their excellent qualifying campaigns and recent form, with Wales having risen from a lowly 112th in the FIFA world rankings just five years ago to a record high of 17th. After qualifying first in their group, Slovakia will be similarly confident of leaving the Bordeaux stadium with a point or three.

Euro 2016 is the first major international football tournament to include Wales since 1958. Their opening fixture against Slovakia will be televised on the BBC, but if you’d rather be there to witness sports history in the flesh, you’ll need to start making travel plans.

If you’re thinking of travelling to Bordeaux from the UK by car, you can do so via the Eurotunnel or you can take a ferry.

Thanks to its direct link to the M20, driving to the Eurotunnel is relatively straightforward. Exit the M20 at junction 11A and the road will take you directly to the check-in booths.

When it comes to taking the ferry, there are several options to consider. The crossing you choose will depend on where you’re driving from in the UK as well as any ticket offers you can find.

Before you decide on the default Dover-Calais crossing, be aware that the port of Calais is considerably further away from Bordeaux than most of your other options.

Here are the likely ports from which you’ll be choosing and their distance from Bordeaux by road:

Let’s look at two ways to drive from London to Bordeaux.

Firstly, if you’d like to take the Portsmouth-St Malo ferry, it will take about two hours to drive to the Portsmouth ferry terminal from London.

From St Malo, the route to Bordeaux passes the cities of Nantes and Rennes. You can also take the opportunity to visit the west coast on the way down, as you will be driving near to some popular resort towns like La Rochelle.

The longer Calais-Bordeaux journey will take you all the way from the country’s north-eastern reaches, to its south-west borders.

You have the option of driving through Paris by making only a small detour on either the A1 or the A16, or you can bypass the French capital and take the following, quicker route:

For detailed step-by-step directions for every leg of your UK to Bordeaux drive, use our journey planner.

While planning your trip to see Wales kick off their finals campaign at this year’s European Football Championships, do take some time to familiarise yourself with the rules of the road in France, which differ in some important ways from those in the UK.

We’ve put together an article detailing some of things you should know before disembarking the ferry in France. Take a look at our guide to driving in France now.