The French Riviera was made for road trips. With its miles of rocky coastline and mountainous regions, it provides exciting drives as well as incredible scenery.

Driving to the south of France and then trekking around the French Riviera should be high on any car enthusiasts list, especially if you have a convertible to really make the most of the weather.

With blue skies and blue waters that stretch on forever, French Riviera holidays have been popular with sun seekers for hundreds of years. It was even a winning winter destination for the British aristocracy towards the end of the 18th century.

But there’s more to do than simply sun yourself on the beach, as the Côte d’Azur is home to many of France’s most beautiful historic towns and villages, as well as glittering urban hotspots like Cannes and Nice.

There are dozens of destinations to choose from, but here’s a small selection that offer up French Riviera holidays you won’t soon forget.

This map of the French Riviera shows some of the major destinations to help you plan out your road trip along the Côte d’Azur. 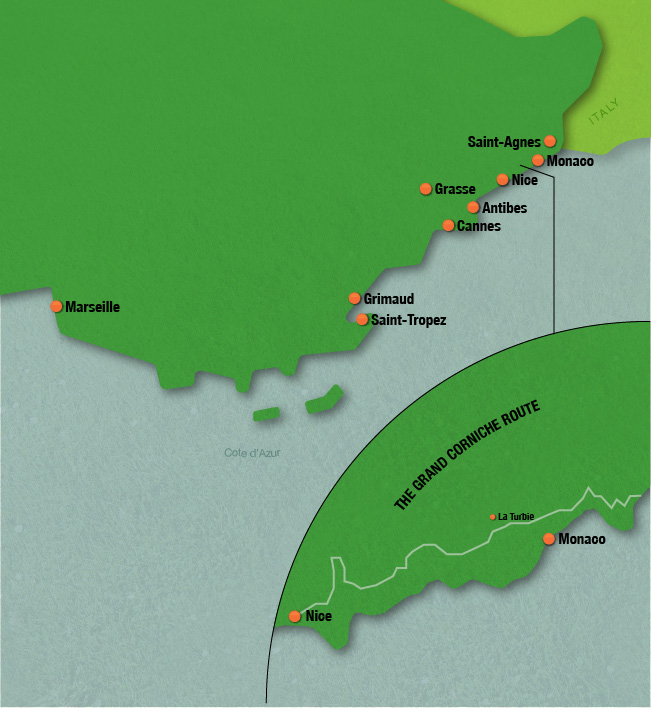 There’s no official boundary for the French Riviera, though Marseille and Cassis are regarded as the most westerly points and the border with Italy as it’s eastern extreme. So if you want to take a road trip to the French Riviera the exact route you take will vary based on your destination and your setting off point.

Either way, a road trip to the French Riviera offers some fabulous driving, so soak up the changing scenery as you make your way through France down to the southern coast.

When you arrive at the Riviera there are several beautiful drives you can undertake. Here are a few to whet your appetite:

Driving to the south of France

If, like most people having a driving holiday in France, you arrive in Calais (either by ferry or Eurotunnel) then you’ll find the routes take you on pretty easy motorways all the way down to Marseille, or other major cities in the region. You can plan out your trip using our route planner.

The drive down to the French Riviera is about 10 hours or so, if traffic is good, so it’s definitely worth splitting up over a few days. That way you can also take in parts of inland France along the way, such as Lyon and Avignon.