The Tour de France is one of the top summer sporting events in the world. A supreme test of endurance and skill, the race has a passionate following and attracts fans from around the globe.

With the course tracing through some of the most breath taking scenery in France each year, it’s no wonder people want to go and see the race in person.

With Britain’s Chris Froome setting out to win his third Tour de France, this year could be the most exciting time to drive the Tour de France route. While watching the race on TV gives you a great overview of the event, and lets you see a lot more of it than you can in person, the energy and excitement of seeing the race live can’t be beaten.

So here’s a simple guide to help you drive the Tour de France route and get the most out of your trip.

The route for the Tour changes every year, and usually takes in parts of other neighbouring countries too.

The bulk of the 2016 route runs down through France, before edging into Spain and Andorra along the Pyrenees, then running along the south coast of France and up into Switzerland and then finally into the traditional finish on the Champs Elysées in Paris.

Although you could simply follow the route stage by stage, driving on to the next point and fixing a spot to watch the cyclists from, it can make sense to choose which stages you watch with more care.

In the earlier stages, especially those that are flat, you’ll find the peloton (the pack of riders) stays close together and you’ll often get to see the bulk of the pack zoom past before disappearing into the distance.

Therefore, if you want to really experience the cycling and not just enjoy the scenery, it can make more sense to take in the time trials and the mountainous stages. This way you’ll get to see far more cyclists over an extended period of time.

This year there are two time trial stages covering 54 kilometres:

There are also nine mountain stages, with four featuring summit finishes, and it’s here that you’ll see some of the toughest tests for the cyclists. The four summit finishes will be at:

For some general advice on driving in France check out our guide here.

If you want to cover the whole Tour de France route you’re going to need to drive, because most of the stages pass through relatively small towns and so using public transport will be inefficient, time consuming and costly.

Although you could certainly get into France by other means, such as the ferry or Eurotunnel, following the course by any other means than car just won’t be worthwhile, unless you only want to see a few stages at the major destinations like Paris, Montpellier, Berne and so on.

The first thing to do is pick a stage and get to the town. Remember that on the official Tour de France website you’ll find a list of all the stages and their start and finish points as well as other information.

Nearer to the time of the race, usually in May, there will be detailed maps and timetables so you can see the breakdown of each stage.

When the Tour de France route is finally set up a lot of roads are going to be closed off. Check this online before heading off, or immediately with the local tourist office when you arrive, because due to the road closures and the increase in traffic, it can take longer than you might think to get around.

You need to decide where you will spectate each stage from, because it’s highly unlikely you can watch it from multiple points due to the speed of the race, closed roads and heavy traffic.

Remember, because you won’t be able to park that near the course you need to allow yourself 30 minutes or more to walk from your car to the actual route.

Get to your spot before the caravan comes past and then, by the time the riders pass through, you’ll have got a good few hours of the Tour de France experience even if you’re on a flat stage where the riders stay clumped up.

Before each stage of the Tour de France commences there is a huge parade of vehicles called the Caravan. Sponsors of the event send out a huge line of cars and floats along the Tour de France route handing out gifts and entertaining the spectators.

Make sure you find a spot along the roadside that isn’t crammed full of people. Although this isn’t exactly easy, each stretch of the course is in excess of 100 kilometres so you’re bound to find a few areas where the crowd thins out.

Get ready for the Caravan and then, if you want freebies, leave your British modesty at home and jump up and down, wave and shout and you’re bound to receive some mementos and gifts.

On the day of each stage the locations will be heaving so getting food and drink will be a major challenge. Plus, in rural and remote areas, you may find that restaurants and shops have opening hours that don’t really cater to spectators. So be sure to take along the following:

For a visual reference here’s a Tour de France map, which outlines the route so you can plan your itinerary and make sure you’re at the various stages in good time to enjoy the atmosphere. 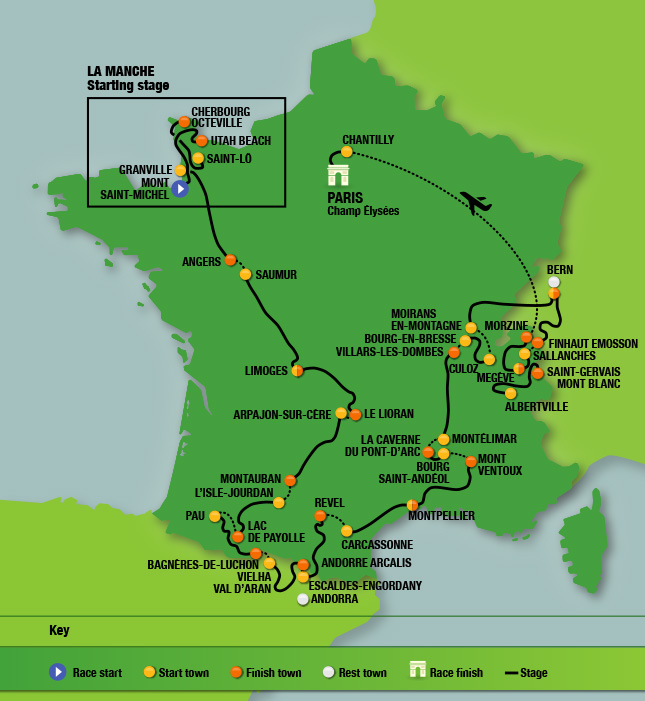 Read more
How to get to Stade de Lyon